Example: Check whether 15n is divisible by 10 or not for any natural number n. Justify your answer.

Example: 2 and –3 are the zeroes of the quadratic polynomial, .

❖ Geometrical meaning of zeroes of a polynomial
The zero of a polynomial,  (if it exists) is the x-coordinate of the point where the graph of y = p(x) intersects the x-axis.
For example: 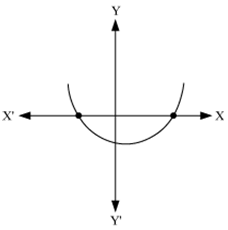 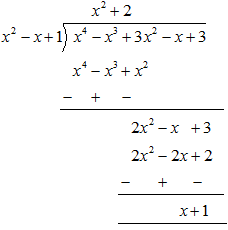 Required solution is
• Cross-multiplication method
The solution of the system of linear equations a1x + b1y + c1 = 0, a2x +b2y + c2 = 0 can be determined by the following diagram.


❖ Certain pairs of equations that are not linear can be reduced to linear form by suitable substitutions. 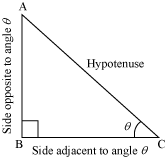 ❖ Mean of ungrouped data
If x1, x2 …, xn are observations with respective frequencies f1, f2, … fn for a given data, then the mean of the data is given by 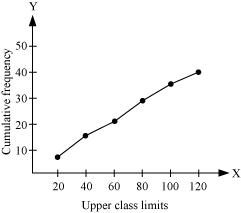 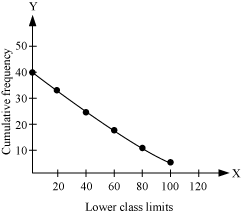 Note:
The x-coordinate of the point of intersection of the “more-than ogive” and “less-than ogive” of a given grouped data gives its median. 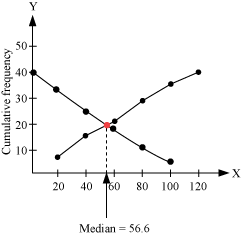 ❖ Line of sight
It is the line drawn from the eye of an observer to a point on the object viewed by the observer.
❖ Angle of elevation

Let P be the position of the eye of the observer. Let Q be the object below the horizontal line PX.
Angle of depression of the object Q with respect to the observer P is the angle made by the line of sight PQ with the horizontal line PX. That is, ∠XPQ is the angle of depression. It can be seen that
∠PQR = ∠XPQ    [Alternate interior angles]
❖ The height or length of an object or the distance between two distant objects can be calculated by using trigonometric ratios.

Example: Two wells are located on the opposite sides of a 18 m tall building. As observed from the top of the building, the angles of depression of the two wells are 30° and 45°. Find the distance between the wells.
Solution: The given situation can be represented as

❖ Tangent
A tangent to a circle is a line that intersects the circle at exactly one point. The point is called the point of contact of the tangent. 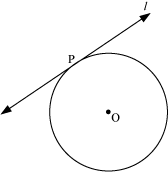 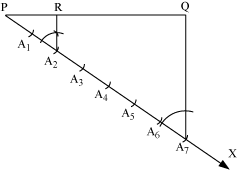 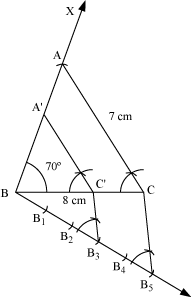 ∆A′BC′ is the required triangle.

• Case II: Scale factor greater than 1
Example: Construct an isosceles triangle with base 5 cm and equal sides of 6 cm. Then, construct another triangle whose sides are of the corresponding sides of the first triangle.
Steps of construction:
(1) Draw BC = 5 cm
(2) With B as the centre and C as the radius 6 cm, draw arcs on the same side of BC, intersecting at A.
(3) Join AB and AC to get the required ∆ABC.
(4) Draw a ray , making an acute angle with BC on the side opposite to the vertex A.
(5) Mark 4 points B1, B2, B3, B4, along BX such that BB1 = B1B2 = B2B3 = B3 B4
(6) Join B3 C. Draw a line through B4 parallel to B3 C, making an angle equal to ∠BB3 C, intersecting the extended line segment BC at C′.
(7) Through point C′, draw a line parallel to CA, intersecting extended BA at A′. 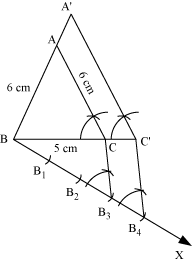 The resulting ∆A′BC′ is the required triangle.

❖ Construction of tangents to a circle
Example: Draw a circle of radius 3 cm. From a point 5 cm away from its centre, construct a pair of tangents to the circle and measure their lengths.
Steps of construction:
(1) First draw a circle with centre O and radius 3 cm. Take a point P such that OP = 5 cm, and then join OP.
(2) Draw a perpendicular bisector of OP. Let M be the mid point of OP.
(3) With M as the centre and OM as the radius, draw a circle. Let it intersect the previously drawn circle at A and B.
(4) Joint PA and PB. Therefore, PA and PB are the required tangents. It can be observed that PA = PB = 4 cm. 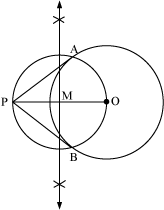 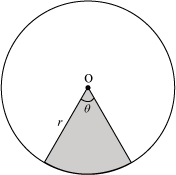 • Area of a quadrant of a circle with radius 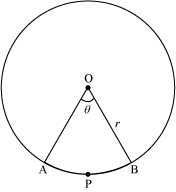 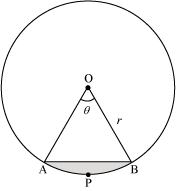 Note: Volume of the combination of solids is the sum of the volumes of the individual solids
❖ Conversion of a solid from one shape into another
When a solid is converted into another solid of a different shape, the volume of the solid does not change.

❖ Determinant of a square matrix A is denoted by or det (A).

❖ Determinant of a matrix is

❖ Determinant of a matrix is given by,

Similarly, we can find the determinant of A by expanding along any other row or along any column.

• If the equi-multiples of corresponding elements of another row or column are added to each element of any row or column of a determinant, then the value of the determinant remains unchanged.

Since area is always positive, we take the absolute value of the above determinant.

• Co-factor of an element aij is defined by where Mij is the minor of aij.
Example:

• If element of a row (or column) are multiplied with co-factors of any other row (or column), then their sum is zero.
For example: If A is square matrix of order 3, then

• If elements of one row or column of a determinant is multiplied with its corresponding co-factors, then their sum is equal to the value of determinant.
Example:
If A is a square matrix of order 3, then


❖ Application of determinants and matrices
The system of following linear equations

can be written as AX = B, where

Assignments
Chapters
Textbook Solutions
Tests
Synopsis
Thank you for your interest.
We will get back to you soon OK
Call me
Have a Query? We will call you right away.
+91